Despite chugging through quite a lot of hobby stuff in the past weeks and months, I'm not finding taking photos of stuff any easier or more enjoyable, half the time things don't come out looking very good, the other half I notice that the figures aren't nearly as good as I thought!

Well that's the excuse for my slow updates out of the way, here's some pictures.

I've actually had the first bunch close to completion for a while, they just needed some final details and basing.  Its a unit of Vargheists, new additions to the army this latest version of the book. 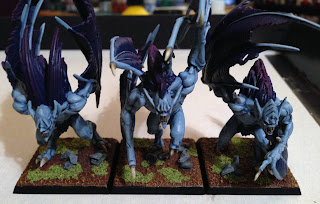 The kit allows you to make the winged terrors shown here, or huge ghoul like creatures that really don't float my boat - I'm looking for some werewolves to use instead.  I've gone for a slightly unusual colour scheme, using the new GW paints - the space wolf armour progression I think for the skin and a slightly unusual blue to purple blend for the wing membranes and fur. 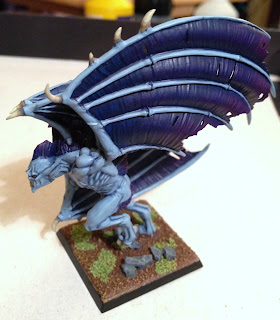 Each of the new guys is a completely separate sculpt which makes them all very characterful.  The downside is should you get more than 3, the parts aren't multi-pose or even compatible with different bodies, so without converting you are stuck with the same 3 poses over and again. 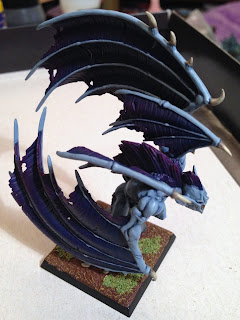 This chappy with the extra set of wings is the unit champ, my favourite pose of the 3.  I've found the unit to be an interesting addition to my army, so very useful in most match ups if you can save them from being shot!  I've based them consistently with the rest of my newly coherent undead, although I've added some small bits of shale to break up the larger bases. 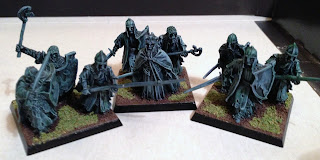 Next up are the figures I use as spirit swarms who have been around for a while now.  I really don't like the current standard models, so I've used instead Lord of the Rings army of the dead models.  I've used the metal set that included the king which I don't think is available now, but you do get a lot of plastic warriors in the set now.  I've mounted 3 to a 40mm base (what we called Monster bases back in my day, relatively tame these days that size!) and when formed up they do look like a mob of ghostly warriors which is perfect. 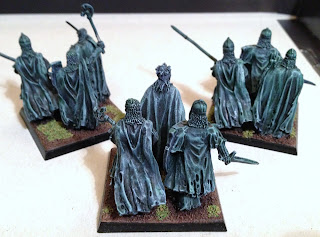 I painted these very easily, I recommend the trick.  Painted over a black undercoat (my standard) I dry brushed the entire lot dark grey.  I then progressed the grey tone lighter and lighter till I used only the slightest amount of near white paint.  Once this was all done, I liberally doused the lot in green wash and ta-da, job done.
Posted by Unknown at 19:11