Ok, this is a long one, but bear with it, there's a competition in here!

Last year I took the plunge into Privateer Press's Warmachine/ Hordes games by starting a Minions army.  My gators have had a few posts of their own but although I like the models, I found their choices limited, their game play restrictive and a bit defensive in what is generally an extremely aggressive game.

I have been thinking for a while maybe I picked the wrong faction for my play style, certainly when just starting out with a game finding an army you enjoy is important.  With the news that my local store 7th Heaven Games was going to run another Journeyman league I thought I'd approach the game with a fresh set of eyes and give it another go.

After a lot of pondering and reading of the excellent BattleCollege I decided that I rather liked the Legion of Everblight.


These monsters are the babies of a dragon (Everblight) and, in the world of Hordes, Dragons are serious business - essentially Gods or Titans made real.  These little critters are only the tip of the iceberg, the whole army is dripping in shark headed dragon things of all sizes so I was really quite tempted.  I have issues with some of the infantry models, but the range choice available compared to Minions was enough that even if I ignored the units I didn't like, I'd still have 3 or 4 times more things to choose from!
As well than my dragon fixation, I noticed the shredders reminded me a lot of the Cheat, so that more or less sealed the deal.  Things got sweeter when I found someone (thanks Hobbydad) to share the 2 player starter box with - Legion are one of the two forces in the box and along with a mini rulebook, for the same price as a starter battlebox you get an entire unit of troops extra (big beefy infantry at that).

Having chosen my new army, I then had to decide how to paint it. I didn't want to use the standard colours if I could find another scheme that worked plus there's 3 other local players with Legion already so I wanted mine to be a bit different.  For inspiration I looked on the official forums for ideas (link here).

I narrowed my inspirations down to 3:
Some amazing paintwork here and a really interesting idea.  Click on the name to go to CloudFang direct on the forum and see more of his work.

A minor variation of the main scheme and some great paintwork once again.  Click on PG_Col_Festus's name to see more.  This made me think about how I could tweak the main colours and still have my own flavour.
The last option was a lot more unusual.  CaptainSpud's scheme is, well, orange and you may have noticed on this blog I like orange, although I never paint a lot of it.  This chap has featured in the pages of No Quarter magazine so clearly this is a top notch job as well.

Having chosen three templates, I needed to try them out.  I like painting over a black undercoat and while I am happy to take my time, I don't want to go mad with very difficult colours or effects (hello and goodbye yellow).  I had some GW Genestealers spare that share a lot of features with the Legion - chitin armour plates, tough skin areas, lots of arms and claws and teeth.  Hopefully I would be able to make a decision based on how painting them went.  For all the schemes I used GW's current paint range, generally their recommended colour progressions as well.  My thinking was I needed to be able to get hold of the colours easily (in order to be able to add to the army for years to come) and if possible avoid mixing highlights to make everything as consistent as I could. 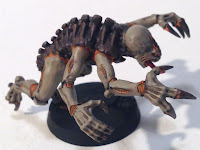 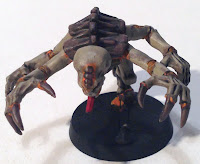 So here's the CloudFang scheme.  This was tough to pull off effectively, maybe a Genestealer isn't the best model to try this on, but it was a lot of effort and didn't really look anything like as good as the original inspiration (CloudFang has done an excellent tutorial on his threads if anyone wants to have a go - black undercoat was the biggest mistake here). 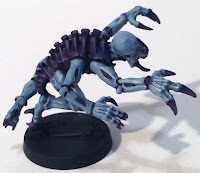 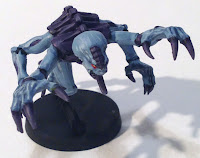 PG_Col_Festus tweaking the normal scheme inspired me to do something similar, the Genestealer figure inspired this in part, but its also the same colour combo I used on my Vargheists.  I was pleased with how this came out. 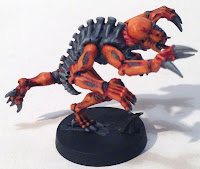 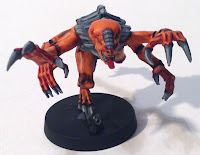 So finally CaptainSpud's colours.  I was really hoping this would work but orange can be a difficult colour.  It took a fair amount of effort, however the final effect was I think worth it and worthy of consideration.

Next I went to social media and asked anyone who would share an opinion what they thought of the three.  I was secretly hoping for orange, but the blue-purple was a close second.  In the end orange got the thumbs up generally so now convinced I wasn't just orange obsessed and it really did work, it was time to get going... 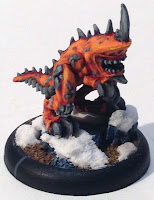 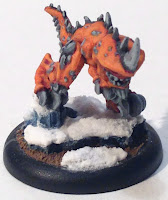 ...and here's the Shredders.  Notice how they aren't a million miles away from the Cheat?  These little mouths on legs are a lot of fun to paint but there's not a lot of armour on them so I'd need to get to a bigger beastie to see how that looked. 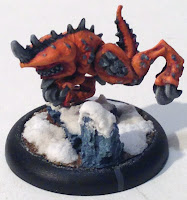 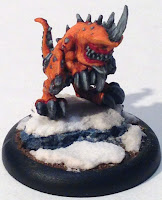 I'm going to try using Jokaero orange over Mephiston Red in future before Troll Slayer Orange as otherwise it takes several coats to go anywhere over red, so hopefully this will save me some time. 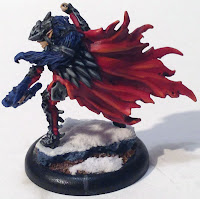 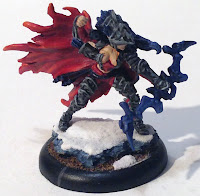 This is Lylyth, my warcaster.  I'm still experimenting with the skin tones I want to use on the Nyss (that's northern elves to the uninitiated) but here I've experimented with an orange base blending to a subtle light purple (I don't think you can tell!).  The clothes and cloak are orange but with a strong red base.  The armour is the chitin grey and as a spot colour I've used dark blue.  This wont come up much on the beasts but on infantry there's often too many elements too close together to just use 2 colours to my mind. 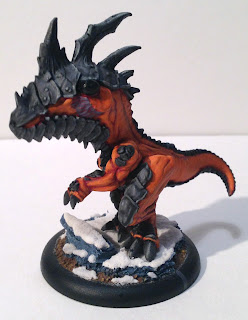 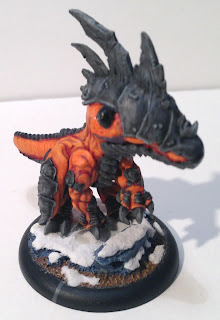 So big beasty time.  I was already planning ahead by this point and had bought a Legion heavy warbeast box which comes with the components to make 3 different gribbles.  Using magnets I would be able to use all of the options in different games, and with 2 torsos to work with, I had a lot of variety very quickly.  My wife pointed out that with the main arms and head removed, the torso actually looks like a cute dinosaur, the black ball joints are the eyes and he has a huge chibi style head so I had to take a shot to share this with you. 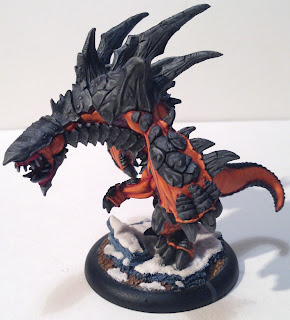 This is the Carnivean mode.  The 11 point monster is a bit of a poster child for the Legion so I was more than happy to have him as my first big warbeast.  The three shots I think give you a good impression of how the colour scheme translates and I think looks really effective. 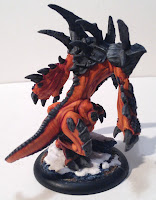 Some shots from the front and rear. 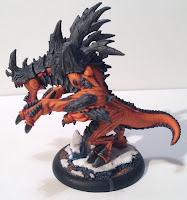 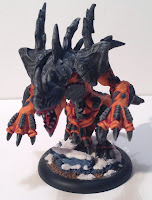 Here's the Ravagore version, a simple head and upper arm swap and I have a different beast to use in my games, this one is an acid spitting monster (I have a flame/acid spurt effect to add to the mouth once its complete). 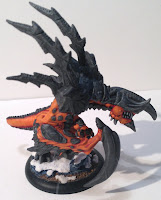 Finally there's the Scythean, a close combat specialist with huge shoulder spines for some reason. 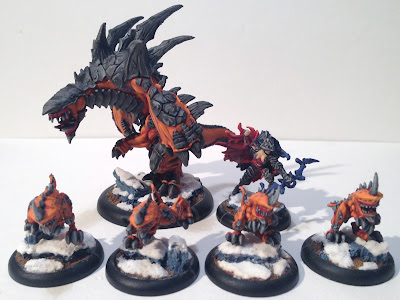 Here's the battle box group shot, the basic starter force.  Its 13 points which is a lot for a battlebox and very effective in the game (unless you are playing against Mark's Stearforge).  I've played a lot of games at battlebox level, winning 4 out of 6.  At 15 and 25 points I've played 2 games each and just (and I mean really close in some cases) managed to win all 4.  I strongly suspect my luck is well overdue a bashing so I'm already at peace with an inevitable string of loses soon!

That more or less brings me up to date with my new Hordes army, the henceforth named Legion of Orangeblight.  The league expands up to 35 points which means I have a lot more things to paint and I hope to show these in my blog over the coming weeks.

This just leaves the competition.  Now I've chosen my colour scheme I've got 3 Genestealers floating around who are in need of a good home.  Post a comment below as a registered member of my blog (sorry you can't enter anonymously) if you'd like one - you can state a colour preference if you like and if there's more than 3 people interested, I'll pull names out of a hat.  Obviously you'll need to provide me with a postal address at some point - we'll sort that out privately once I announce the winners.  You've got until 5th August to post.
Posted by Unknown at 08:21