So I made a snowman - well snow sculpture anyway. 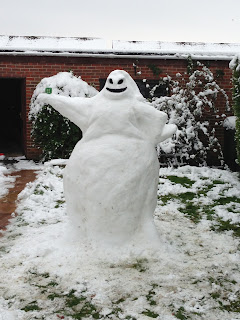 The subject matter might be escaping you - answers after the jump along with the miniature related goodness that inspired this endeavour...


The character in question is Oogie Boogie from Tim Burton's "Nightmare Before Christmas".  The image below is the source of inspiration for the Snoogie Boogie-man (or Oog-loo?) I've made. 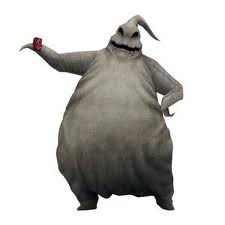 So why am I all about the Oogie at the moment?  Well if you read the last post you'll have seen I've been using some Stitched Togethers in my Zoraida crew for Malifaux.  I'm allowed to use 3 of the evil critters, however Wyrd have only made 2 unique figures.  This got me thinking, perhaps I could make my own Oogie? 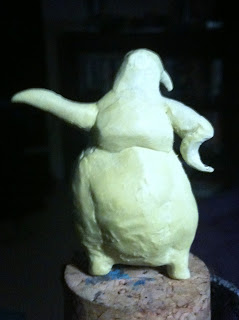 I've not really done much sculpting before, but I felt big burlap sack monster wouldn't be quite as hard as some figures that exist out there!  After consulting my brother and the interwebs I got cracking.  Using paper-clips to make a rough skeleton to sculpt over, I used miliput to make the rough shape of Oogie first. After lots of filing and hacking with a craft knife I had an outline I was happy with, so it was on to the detail.  Using Pro-create I worked on turning the outline into the character proper.  I also took the opportunity to make a themed base, there's a sort of fairground of doom motif in Oogie's lair. 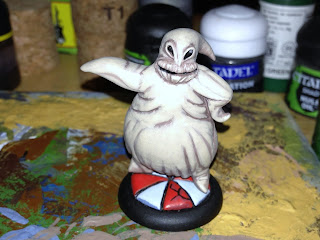 Next it was on to painting - here's a work in progress shot as I argue with myself over detail I had sculpted and things I had painted for effect - some worked and some didn't make the final version. 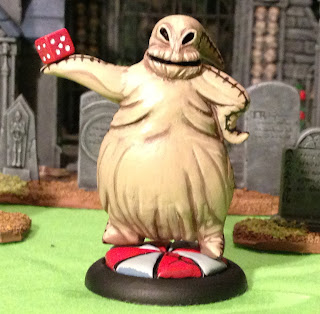 So here he is finished, now holding the fateful die!  I didn't sculpt the stitches in the end as it wasn't going well, so I opted for simply painting them and I think it works well enough.  I also repainted the die, I got some feedback on my stitched that they were too shiny so I took note and fixed that here.